You are at:Home»Older posts»Interviewing The Greats – Talking To The Biggest Names In Poker 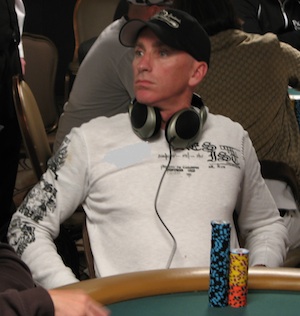 Interviewing The Greats – Talking To The Biggest Names In Poker

I’m very happy to have been asked to contribute a column to the partypoker blog. I’ve been covering poker since 2003, and believe it or not, my very first game of online poker was played on Party Poker back around 2004.

In 2006, I attended, and covered, the last Party Poker Million that was held at sea: luckily, international law prohibits me from sharing any seafaring tales about THAT particular voyage.

Since then, I’ve been lucky enough to be involved in the poker industry in a multitude of ways. It’s a great game, full of great characters and even greater moments. I look forward to sharing some of that with you….

When folks find out that I’m the host of a big poker radio show, and that I cover and play in the world of professional poker, they always have two questions: 1) What’s the most money you’ve ever won (for the record, if the government of Canada is listening, the answer is ‘Why, not very much at all, thank you’). And 2) What is so and so really like? (Fill in the blank with the name of any well known pro).

It would seem that, as poker pros become big international stars, everyone wants the TMZ scoop on the names and faces that we see so often on television. Over the years, I have had the privilege of sitting down and chatting with the biggest names in the business. And it’s always illuminating.

Poker players yet to find a filter for interviews

Unlike a lot of athletes and celebrities, poker players have yet to find a filter when it comes to interviews. So many of them simply tell you what they really think, and it makes for great reading/listening/watching. I remember one of my very first interviews of a poker player, speaking with the legendary T.J. Cloutier.

I asked T.J. about the behaviour of some of the newer poker players that had arrived on the poker scene in huge numbers, often causing disruptions at the tables during tournaments. T.J. didn’t mince words. “I can tell you this: if this was the old days and they acted like that, someone would have taken them out to the desert and that would be the last you’d ever hear of them’. An excellent reminder to NOT annoy Mr. Cloutier.

Daniel Negreanu is another player who will simply tell it like it is. When you add to that mix the fact that Daniel and I have been friends for years, the answers to interview questions are often very blunt. In 2009, Daniel and Phil Hellmuth engaged through our radio show in a war of words that made poker news everywhere.

Phil had been on the show talking about the future of the poker industry, and Daniel came on a week later to offer a rebuttal. The two mega-stars went at it through the media for the better part of a month, and, let me tell you, it was fun to watch.

And Daniel is no stranger to controversial statements. Part of his feud with Annie Duke has played out on our show, and it’s always been interesting talking to both Daniel and Annie about their thoughts on each other.

Phil Hellmuth is probably the player that most people ask about. ‘What’s Hellmuth REALLY like in real life?’ is a very common question. I’ve spent some time with Phil, both on and off the record, and the truth of the matter is, he’s really a nice guy. Yes, he’s the poker brat. Yes, he can shatter world records for celebrity namedrops in a single sentence, but he really is a genuinely nice guy.

All you have to do is listen…

I remember a day that Phil and I spent together in Toronto a couple of years ago: early morning interview for The Hardcore Poker Show, followed by lunch and a celebrity/media tournament, followed by another appearance on national TV on a Canadian sports show called ‘Off The Record’. Through it all, Phil was gracious and accommodating to every single person he met. Poker Brat? PPpphhhhhhttttt. Whatever.

Then there are the really classy ambassadors of the game. The two names that immediately spring to mind are the legendary Mike Sexton and the late great Chip Reese. Sexton is the ultimate ambassador to the game of poker, and that’s reflected in his Hall of Fame status.

I have interviewed Mike numerous times, and he never fails to mention some charitable organization that needs help, or some political cause that has some importance for poker players. He’s a real gentleman, and, as a side note, always willing to make a bet.

Not long ago, I took in a hockey game in a Party Poker private suite with Mike and another good friend, Kara Scott. Mike wasn’t the most knowledgeable hockey guy in the world, but that didn’t stop us from making all sorts of silly prop bets to make the game more fun. And Chip Reese was much more than perhaps the best all around poker player to play the game. He was a voice for the game, and one that is sorely missed.

And let’s not forget the outspoken ones: perhaps you’ve heard of Tony G? The really interesting thing about interviewing Tony is that you never know which G you’re going to get. Will it be the wild ‘on yer bike’ Tony, or the quiet, thoughtful businessman? Either way, he always has something interesting to say.

There are many more great names and players that I’ve had the privilege of interviewing: Doyle Brunson, Phil Ivey, Tom Dwan, Phil Galfond, Devilfish, Laak, Lederer, Duke, Matusow, and just about all the living world champions. One thing is certain: poker players always have something to say. All you have to do is listen…

Chris Tessaro is the host of The Hardcore Poker Show, on Sirius Satellite radio. Chris is responsible for the famous prop bet that saw Party Poker’s own Kara Scott forced to don a fuzzy bunny suit for a TV appearance.