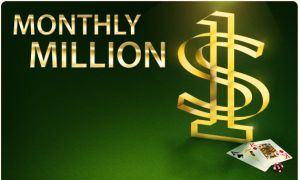 Interview with the PartyPoker millionaire – KASABIAN_LSF

KASABIAN_LSF won $200,000 in the Monthly Million and then in late February even won the $50K Guaranteed – what a run!

Here is more from KASABIAN_LSF:

Poker became part of my life in mid-2004, just after the internet poker boom. I saw one of my friends playing online and thought I would give it a try. As I was in the Royal Navy at the time I had lots of time to read and study the game when my ship was at sea. I read a few basic LHL books and the Super System.

I would play limit cash games and NL tourneys on Party, at weekends and holidays. To start of with I was a losing player because I had bad hand selection (playing too many hands). In early 2005 I turned my attention to SNGS and built a small bankroll, in May that same year I finished 2nd in the Monthly Million on Party for $120,000. That’s when I decided to leave the Navy and Grind Sngs for a living.

A nice holiday for me and my family

In my early days I suppose I was a loose aggro player. As the game is today I think it is very important not to play a certain way and to adopt to what is happening around you. In  some of the higher stakes games players are so aggro that you need to sit back and let the chips come to you!

Some of money will be invested in property, some I will use as a bankroll for mid stakes mtts, Wsop sats, and a nice holiday for me and my family.

My Dream table would be:

The hand that set me up for the win

The Monthly Million tourney started of well for me as I doubled up early. I raise with JJ early pos, 3 callers – the flop came jx2 , with two diamonds. I bet, 1 caller. I’m sure he has a flush draw, I bet again he calls, 2 of diamonds on the river. I shove 17,000 into a pot of 7,000. He time bank calls with the nut flush.

After this hand I was card dead for a few hours, this isn’t a big problem in this tourney because of the great structure. When the antes kicked in I turned up the aggression with the odd three bet and chiped up nicely. About eight hours in I was moved to a table with several strong players to my left, they made it hard for me to gain chips by stealing so I had to change my game to counter their constant aggression.

This involved changing the pos on the table that I would steal blinds from and four bet bluffing now and again. A hand that has stuck in my mind played out like this: the two big stacks at the table, me and an aggressive Scandinavian player. We both had 6 million chips, he raised my blind, I defended with KQ. Flop KK2, I make a weak lead, he min re raises and I make the call. Turn is an 8, I bet again he calls – river is another 8. I shove and he snap calls with A8. This hand set me up for the win.

My goals as a poker player are to keep playing online in mid/high stakes MTTS, Sat into my first WSOP this summer and play some WPT and WPT live events.

My advice for other players: Read some good books, winning tournaments one hand at a time, Kill Everyone. Join poker X factor and Card Runners. If you know others players talk to them about hands. When your playing poker never rush take your time over every decision.

Next MonthlyMillion is played this Sunday, you can qualify via a wide range of satellites, you can buy in directly for $600+40. To prepare for the Monthly Million we have a new poker lesson on PartyAcademy: How to lay down a big hand.