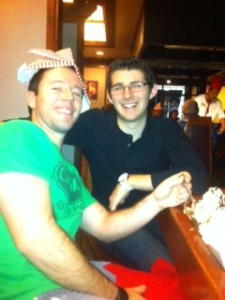 Catching Up and Catching Cards with Imtheocean

Here on the Party Poker blog we love hearing stories from the virtual rail as such.

Starting off this week it’s lmtheoceans (pictured here on the right) turn who recently won a staggering $16,000 Aussie Millions package.

When we caught up with lmtheocean recently it sure seemed he was living the highlife in Mexico, in between learning to surf, working-out and writing he’s turned to playing poker professionally.

(PartyPoker:Dany Willis): Congrats on your big win, tell us when did you first start playing poker?

(Imtheocean): Well I started to take poker seriously when I was about 18 years old. I played poker in the past, I even read a poker book or two, but it hadn’t become my passion up until that point.

DW: So tell us what kind of stakes and games do you normally play when playing online or live? Do you mainly play online poker, live poker, or a mixture of both?

ITO: I’m living in Mexico right now, so I’m mainly playing online. I play as high as $1k buy-in heads-up sit-n-gos, and am hoping to start grinding $2k buy-ins soon. I visit my family about once a month, and I try to play some live poker when I’m there. I play as high as $25/$50 live.

DW: How about live, ever played something like a WPT, EPT, or WSOP tournament?

ITO: No. I’m only 20 and have only been playing professionally for a couple of years so I haven’t had too many opportunities to play major live events so far in my career. I’m thrilled this will be my first major.

DW: Okay so outside of your poker life tell us a bit more about yourself, any cool hobbies and interests?

ITO: Since I’ve moved to Mexico, I have started to learn to surf. I’m still pretty terrible at it, but I’m hoping I’ll be ready to ride giants 6 months from now :). I love traveling. I plan on living out my dream of traveling the entire world while playing poker for the next 5 or 6 years. I also enjoy working-out and writing.

DW: Sounds great, so you mentioned you play professionally now, how did you get to that point?

ITO: Well I play poker full time now. When I graduated high school at 18, my dad was diagnosed with terminal brain cancer. I had planned on going to college on the east coast of the United States, but after he got sick I decided to postpone college so I could be at home with my family.

After passing on school, I quickly realized that poker was my passion, and I wanted to chase my dream of becoming one of the best poker players in the world. I remember telling my dad, and he was furious with me.

Looking back, I know it was much less anger he was expressing and more so fear that I was going to throw my life away chasing a pipe-dream. Sadly, my dad passed away before he got to see me start to excel at poker. It kills me that he might have died worrying that I might wind up being a total screw-up in life. I like to think he checks in on me and the family every now and again from heaven, and gets to see that we’re all doing well.

DW: Well tell us then who are some of your favourite professional poker players?

ITO: There are a lot of less famous poker player’s out there who I would call my favorite’s, because they did so much to help me to get to where I am. Jon ‘Croixdawg’ Ford staked and coached me when I was first getting started, and without him I have no idea where I’d be right now.

I’m a fan of Phil Galfond, Tom Dwan, and Olivier Busquet. Galfond just seems like a great guy, and I learned a lot from watching his training videos. Dwan has been part of some of the coolest tv hands ever to air, and he’s a great ambassador for the game. He’s also the face of the internet generation, and watching him play provides a great illustration to how winning poker strategy has evolved into what it is today. Olivier Busquet is the godfather of heads-up sit-n-gos. In addition to being a great ambassador for the game, he’s also the best husng player in the world and he pushes guy’s like me to be better. I wouldn’t be scared to play with anyone, but I don’t like having to play Olivier, and I’m sure I wouldn’t be too happy to have Galfond or Dwan at my table. They’re all amazing.

ITO: I’m not planning on settling down anytime in the near future, so I probably wouldn’t buy a house, car, or anything like that. I would definitely, use a fraction of that money and continue to travel and explore the world. I would also donate a good chunk to my church. The rest of the money, however, would likely go right into my poker bankroll. I plan on continuing to climb limits, until I honestly believe no matter how hard I work I can’t be good enough to win at a certain level.

DW: How about you let us in on how you ended up winning this promotion?

ITO: I had decided a couple of days prior to playing the Aussie Millions qualifier that I wanted to put more of an effort into trying to win satellites to live events. I had actually played a qualifier the night before where first prize was guaranteed to trip to Seoul to play in an APPT main event. I was fortunate enough to get to heads-up where obviously I felt like I was pushing a pretty big edge. Unfortunately, it was one of those heads-up matches where everything goes wrong, and I busted the tournament in second. Truthfully, I almost started to cry I was so upset that I came so close, and then lost it in heads-up of all ways.

Maybe it was for the best though, as I found redemption in winning the Aussie Millions qualifier the next day. Funny, when we got heads up in the Aussie Millions qualifier, I had a 3:1 chip lead, and the guy I was playing had very little heads-up experience. I ended up losing my huge chip advantage, and even coughed up the lead at one point though. I’m really thankful that I was able to keep my composure and hold when we got it in with my 2 pair vs his pair plus nut flush draw.

DW: So how’d you celebrate your victory?

ITO: During heads-up of the quallifier, my 3 roommates were huddled around the computer with me sweating the action. One of my roommates also had 4 other guys on a skype conference call. My headphones were on the whole time, and I was blaring music to try to block out all the chat circling around me.

When I won, there were just cheers all throughout the condo, coming from myself, my roommates, and from the computer speakers. I called my mom and my brothers and sisters. I hopped on Facebook, and messaged some buddies. After that though, I went right back to grinding lol. I think I managed to squeeze out a couple thousand in profit not including the Aussie Millions qualifier win that day, so all in all I would call it a pretty solid day of poker :)

DW: Thanks for your time Imtheocean, and good luck at the Aussie Millions. And there we have it folks, a few good tales for us all to learn from, chasing his dreams sure seems to be paying off for Imtheocean.