You are at:Home»Older posts»"I do watch WPT on TV and wonder why I'm not there" 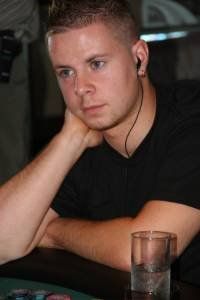 “Pick your own $15,000 WPT package” promotion continues on PartyPoker tables until late May 2010. Every Sunday we give three guaranteed packages, you can even qualify for free, so there is no excuse not to give it a shot. MYBIGGUNS is one of the most recent winners and this is what he says…

I play those $88 satellites most days

I qualified through the $88 satellite qualifier to the $800 final. I play those $88 satellites most days, I probably do about 5 a week.

If I win more than one in a week I get tournament credit too and there’s a pretty good value in them generally with weaker players qualifying from smaller tournaments. The standard was a bit higher in the $800 although still quite a few mentalist.

I was playing around 15 tables at the time

The sat started well flopping a set and making a few chips but of course with the blinds so small it was fairly irrelevant. I was playing around 15 tables at the time so was playing very tight in the early stages not playing too complex or making too many moves.

When the blinds got a bit bigger I got a bit more active but lost a couple of pots and found myself half starting stack (10,000) with the bb 1200. Being so short I started focusing more on this game and looking for good spots to jam in and resteal. It worked well won some pots and back to 30k.

I knew my opponent was super sick

I then doubled with AJ raising around the cuttoff with the BB calling as I know this player would. Flop comes A 7 3 all diamonds, which I don’t love but don’t hate either. There was 13,000 in the pot, I know my opponent was super sick and didn’t want to give a chance to hit on me cheap and didn’t want to face a diamond or even a tough turn decision. Feeling I was ahead I just jammed in 29,000, I was called by 6H6D which is super light but I managed to hold up.

I then opened a lot of pots and bullied the table a bit, people seemed to be playing very scared at this point wanting to make the final table even though only 3 places were paid, so it doesn’t really make much logical sense. I went to the final table with around 120k chips which was a bit above average.

Difference between a good and a great player

On the final table, I got a few raises through first few hands, but then the table became super aggressive. Not wanting to bleed chips away and get raised and have to fold I was only raising pretty premium hands. Situational awareness, adapting and playing according to your opponents and the game situation at different stages in a tournament is the difference between a good and a great player in my opinion.

Couldn’t see many good spots so sat back and tried to get a better read on a few players at the table. A guy then raised UTG but he was pretty loose so his raise didn’t mean much, then another guy shoves for 100k or so and I have AK. I know the player who has pushed all-in has probably noticed it was a loose player raising so his range is a lot wider than I would normally put a guy on for this play. I called and he had JJ and I won that race leaving me in a position where I didn’t need too many more chips to win the seat.

I had a few fairly aggressive players calling my raises most times and I had to do a few fairly risky but calculated plays. Double and triple barreled in a couple of spots to take down the pots with ace high.

Choosing specific situations and players I knew were capable of folding, the game then played out down to 5 remaining with 3 seats. I continued to try and put pressure on weaker and tighter opponents so to not see my chip stack fall, I pushed the small blind with 66 on a guy with 9x bb (knowing I can’t fold if he shoves over my 3x raise and I don’t really want a flop). He called with JJ and I rivered a 6, which was quite lucky although the pot wasn’t all that significant.

I’ll be looking at winning another WPT seat soon

Now we were 4 handed, the smallest stack pushed all-in around 9x with A4, the Big Blind called with A10 and it was all over. All in all I’m happy how the tournament went and I’ll be looking at winning another WPT seat soon.

I started playing on PartyPoker around 5 years ago under a different name. I only ever played cash games then, quite high (between 3 6 and 10 20) and did quite well. I used to gamble a lot on anything then, roulette, blackjack and playing under the influence.

My first few years in poker were a rollercoaster, in the last year or so I have stopped all that and playing only tournaments as I find they are the best steady profit for me. I never play cash now as I feel my tournament game is sharper and I feel more in tune with tournament poker when I avoid cash games as I play the two very differently.

I like playing at PartyPoker because there are a good amount of weaker players as well as a few strong ones. I like the tournaments they have and the tournament structure. I like both the old and the new software although I love the retro software. That’s what I’m using at the moment. I’ve had problems with other sites but I think it has a very good customer service, also I was treated well when I won a WSOP seat on here in 2006.

I do sometimes watch the WPT on TV and wonder why I’m not there lol. I would love to win a WPT title, they are very prestigious and the money would be nice too. I enjoy playing against the best players because its more satisfying when you win and there should be plenty of them in the WPT.

I originally wanted to do the Bay 101 event in San Jose but I had other commitments. I would have preferred to play a 10k event for of course the bigger prize pool, but this time I’m going to play WPT event in Barcelona. I’ve played in the casino in a couple of events last year and I also love the city.

I’ve played against some very good players and some hugely overrated players in live tournaments in the past. I would like to play against some of the huge names of poker preferably in the later stages of the tournaments, winning a WPT title is one of my poker ambitions and it would be all the sweeter to do it against the best. I’m hoping to get sponsored soon so getting a deep at a WPT event would defiantly help me achieve this.

For the comedy value Phil Hellmuth

Offensive to some, I just find him hilarious. I heard him do some poker commentary on TV recently and him not having a filter from his brain to his mouth makes for great TV. He is a funny guy and a good poker player.

All the players I’ve mentioned are very good poker players but my tournament game has come on massively over the last 6 months and I know my best is yet to come. I have played some big events before but I don’t think I was as good as I am now at MTT.

I am super confident at the minute and looking forward to playing all the big live events and hopefully winning some big money and taking down some titles.

You too have a chance of winning the $15,000 WPT package and you too can pick your favourite destination. Qualifiers start from daily freerolls but you can also buy-in directly every Sunday for $750+50 only on PartyPoker.