You are at:Home»Older posts»I am the third most hated man in poker 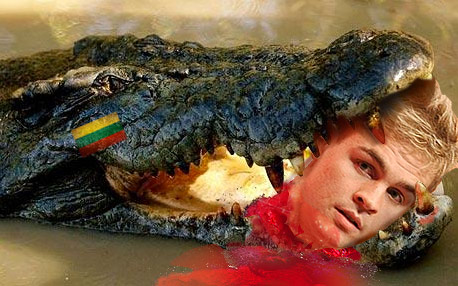 I am the third most hated man in poker

The story continues with Tony saying thanks to Robl and Negreanu and Elizabeth Houston providing background info on the situation.

Life is good. I see that I have been officially made the third most hated man in poker. This kind of wounds me as you know I have big heart. It is for this reason that I would like to apologize to Andrew Robl for my behaviour in the recently broadcast Big Game episode.

I crossed the line with calling the clock on him and giving him a big welcome to the game. I like the kid and wish him all the best – he’ll thank me in later years for this treatment – he will be a man for it. Robl learned that I am big crocodile with Lithuanian stripes – unlike Vlad the Impaler I don’t go for the neck I bite nit heads off clean as this picture shows.

Though I apologize to Robl, I still think I had a point about his nittish waiting at a bus stop behaviour – it drove me to distraction – it made me mad! After all, here’s a kid that makes millions of dollars from the click of a mouse and he becomes one in the harsh live environment. He is merely a starter for a hungry and angry Lithuanian saltie like me.

Andrew, you have to stand up for yourself or you’ll get beaten and eaten by the bigger predators – if you just sit there and take your time you will get hunted down. Take this as a lesson from Tony G. You saw what happened on that aeroplane in the Democratic Republic of Congo. Someone packed a crocodile in their sports bag, it escaped and run amok.

I love all my haters, I really do

What made me laugh was that Daniel Negreanu even called for the trike for Robl at one point – that’s a bit rich coming from kid poker considering I still adamantly believe he stole my bike and trike after the partypoker813.com Premier League IV. To this day he remains a bike thief – guilty until proved innocent.

I also see some forum comments about the lovely loose cannon in this episode. Elizabeth Houston is a delightful lady who played for an excellent charitable cause and she showed heart and did well. Importantly, this loose cannon also played hard after the show so I have nothing but respect for her. And before you say anything, there was no swapping – I saved that for Viffer. Will I call Houston? Only if I want an ace from space!

I would like to thank the wonderful 2+2 community for venting at me for being too harsh on the young pro – I love all my haters, I really do and hope they can vent against me even more.

That’s it for now. I’m hungry and off to play some Crocodoplis at PartyCasino.com.

The story continues with Tony saying thanks to Robl and Negreanu and Elizabeth Houston providing background info on the situation.