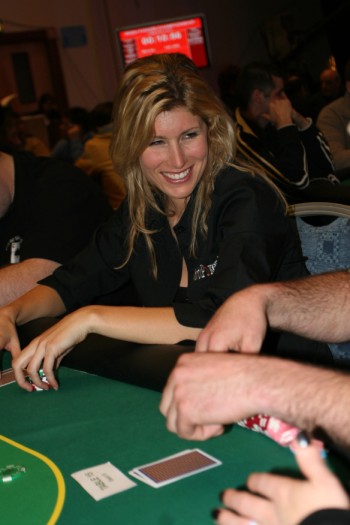 Biochemistry student Jude Ainsworth, 28, was a relaxed man when he paid the buy-in for the main event at the partypoker813.com Irish Poker Championship. He had submitted a year’s worth of research back in December and decided to play poker for a while – a decision that paid handsome dividends when he walked off with the €180,000 first prize.

The event, the first big tournament in Europe this year, was held at the Radisson SAS Hotel, Galway, Ireland, attracting a 298-player field packed full of not only Irish alent, but from across Europe, including Holland’s Marcel Luske. 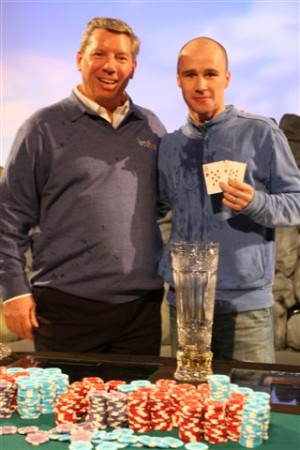 After winning the event, Ainsworth said: “It doesn’t get much better than this. “To say that we are going to sink a few pints is an understatement! I couldn’t ask for uch more than this, I’ve had great support all the way through. I was planning on taking a break after finishing my Phd, and this makes everything a lot easier!”

Ainsworth has lived in Claregalway all his life and is married to Ashley with one child. “My wife is in Hong Kong at the moment, she works for the local toy business. She’ll be delighted! I definitely plan to take us on holiday but I am also looking at playing in a few more tournaments and perhaps the WSOP in Vegas in the summer.”

Before taking out a top field at the partypoker813.com IPC, his biggest success was winning his local tournament, the Connaught Challenge Cup, and small stake online sit-and-gos. 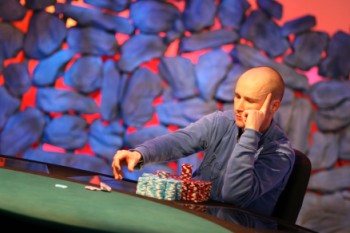 Jude Ainsworth at the final table

Ainsworth reached the final table second in chips to Donegal’s Keith McFadden, who had dominated the tournament after knocking out both Mike Sexton and Marcel Luske then they had huge stacks and led after day one and day two.

First out on the final table was Galway’s Bernard Brady, followed in quick succession by Lurgan’s Glen McCabe, Donegal’s Keith McFadden and then London’s Michael Moran. McFadden’s dominance of the tournament and chip lead came to end in a key hand with Athlone’s Tommy Watson where his pocket kings got cracked by A-K when an ace hit on the turn.

Next to go was Cork’s Trevor Dineen, followed by Watson to leave it heads-up between Ainsworth and Michael McCool from Nottingham. McCool had a gang of supporters but there was only one winner for the partisan crowd at this point.

At the heads-up stage, Ainsworth had 1.7 million to chips to McCool’s 1.3 million and the lead swung a number of times. The decisive hand came following an 180,000 raise by McCool. Before looking at his cards Ainsworth said he felt he had a hand – and after looking moved all-in. McCool called with pocket fives, while Ainsworth was holding 10 -8 of diamonds.

The flop came down 9 of spades, jack of diamonds and ace of diamonds giving Ainsworth a massive flush and straight draw. A queen of hearts came on the turn giving Ainsworth the straight, the crowd went mad and the main hall at the Radisson was alive with the sound of popping champagne corks. Most of it ended up all over Ainsworth and in the trophy – presented by Mike Sexton – as he was held aloft by his friends. The winner was quick to thank his friend Derek Murray, who had talked him into playing in the first place.

McCool, an ex-greyhound trainer and a regular at the new Dusk Till Dawn poker club in Nottingham, was gracious in defeat. He won €40,000 in a side event in 2007 and has great form in Ireland. Both players didn’t want to see each other in the heads-up situations due to respect built throughout the tournament – and both highlighted the skill they saw exhibited by Ciaran O’Leary, the Irish WSOP bracelet
winner who finished in 13th place.

The €2,000 (9 percent withheld) buy-in tournament organized by PokerEvents.ie and sponsored by partypoker813.com attracted 298 runners on a day when snow engulfed Ireland and produced a final prize pool of €542,500. 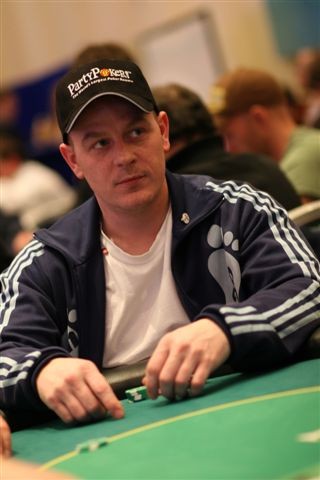 The field also featured online qualifiers, many of whom qualified for as little as $3 on partypoker813.com in addition to a big army of Irish players from every corner of the Emerald Isle after over 500 qualifying satellites were held in pubs and clubs.

At the start Luske was the well backed 25/1 favourite with www.PartyBets.com.

A spokesman for event sponsors partypoker813.com said: “Jude was a very popular and deserving winner and we are pleased for him, his friends and family. There were a lot of international poker big guns in the field but the Irish certainly capitalized on home advantage and were more dominant than expected. We are delighted with all the positive feedback about our first major poker tournament sponsorship in Ireland.”

‘Ambassador of Poker’ Mike Sexton said: “When you play poker in Ireland it is not only about playing the poker. There is a camaraderie here that you don’t find at all poker tournaments.”

Ian Langstaff of Winmedia Ireland, who produced the television coverage of the event said: “It has been a fantastic event and we’d like to thank everyone involved. In particular, we would like to thank Padraig Parkinson for his significant contribution towards taking the IPC to a new level.”

Coverage of the event is being recorded for broadcast on RTÉ, Ireland’s national broadcaster, and will be distributed internationally after first being broadcast in early February. Leading the commentary is the voice of poker, Jesse May, joined by Padraig Parkinson, Ciaran O’Leary and Fintan Gavin.