You are at:Home»Older posts»Hellmuth hops in commentary box for first Group B heat of partypoker813.com Premier League VI 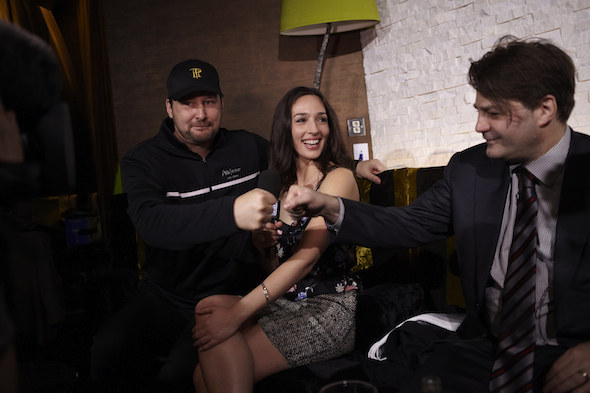 I don’t know about you but the live stream of every minute of the Premier League VI is making for awesome viewing. Whilst the eight players will only be playing in half of the heats, one man will be present for them all, the legendary Jesse May.

He’s taken up a residency in one seat in the commentary box, but he’ll be joined by a rotating cast of some of the top poker players in the world. Last night he was joined by Phil Laak and Jennifer Tilly whilst today the six foot plus frame of Phil Hellmuth has squeezed into the booth with May.

Whilst Hellmuth, the self-styled Poker Brat, has a reputation for table antics he’s definitely mellowed in the last eighteen months, although it’d be presumptuous to think those days are completely behind him. Here are a few snippets from what Hellmuth has had to say on some of the players in Group B so far.

On Dan Shak – “He’s top of the Global Poker Index for 2013, I always have fun with Dan, he’s an amazing guy. He donates a lot of money to charity and plays in a lot of charity tournaments I’m involved in.”

On Tobias Reinkemeier – “It’s a different level of player to play against in the big buy-in events, but it’s pretty impressive how he’s crushed the high rollers.”

On Jason Mercier – “He’s a great games player, I don’t want anything more to do with him when it comes to Open-Face Chinese poker.”

It’s early days still but here are the chip counts as it stands. The biggest pot so far saw Jason Mericer re-raised to 39,000 with pocket jacks, but folded after Tony G made it 100,000 with pocket aces.

Do you like Phil’s commentary? Let’s us know by tweeting #PremierLeagueVI