You are at:Home»Older posts»Guillaume Darcourt Holds off an American Onslaught at WPT Grand Prix de Paris Day 1b 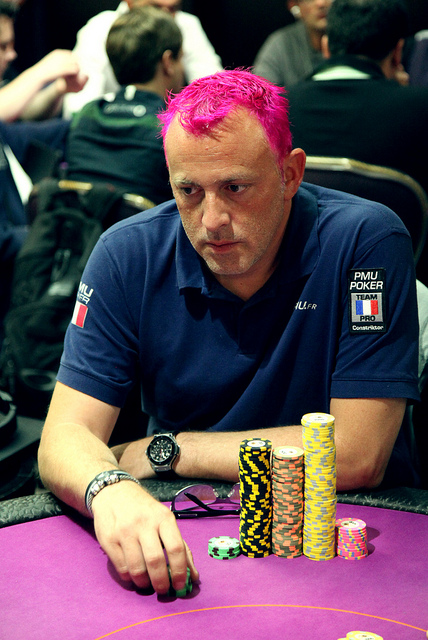 172 players each paid the price of €7,500 to play day 1b of the prestigious WPT Grand Prix de Paris in the Aviation Club de France today. After eight hours of play the person holding the chip lead was the enigmatic Frenchman Guillaume Darcourt with 198,500 chips. The man with the pink dye in his hair is on a hot streak. He recently earned himself a $242,636 payday with a 35th place finish in the WSOP Main Event and recently finished 46th at EPT Barcelona, coincidentally he was also the chip leader of that event after day one. The former WPT Bucharest champion has proven that he knows how to navigate the choppy waters of a WPT field and he is off to a perfect start.

Guillaume Darcourt is a very active player and as such his stack is subject to more swings than a potential Mayweather/Pacquiao fight and day 1b was no different. After driving his chip stack up to an early morning peak of 80,000 Darcourt clashed with the French funny man Bruno Solo in what can only be described as a cooler. Darcourt flopped a set of eights on an

board but incredibly Solo had flopped a set of aces. All the money went in on the turn and Darcourt was down to 18,000 chips. Then Darcourt’s tournament life was on its last breath when he moved all-in on a board of

and was called in two spots. Darcourt was holding

and had one opponent dominated who was holding

but the third player in the hand was holding

. Darcourt was dismayed when he saw his opponent holding two of his outs but waited for the turn and river with baited breath. The turn was a brick but the dealer bounced a King on the river and Darcourt turned a tournament exit into a 65,000 chip stack. After that hand Darcourt got his head down and went to work and finished the day with the chip lead.

You can read the full story of today’s play on our live updates section here. The full story in pictures can be found in our gallery here.