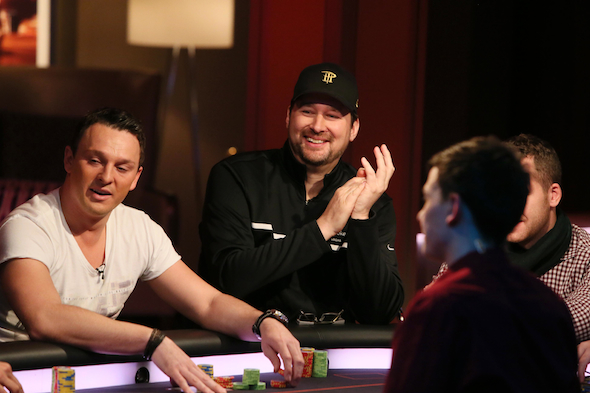 The table is full of joviality at the moment with much of the laughter revolving around Phil Hellmuth, who is taking and giving out the needle in equal measure.

There was much laughing when after Jonathan Duhamel opened to 5,000 with pocket queens, Hellmuth made a massive re-raise to 40,000 with

flop Hellmuth said. “I’m going to have to check,” cue guffaws from the other players, Duhamel made a small bet of 35,000 and Hellmuth said. “If you’re bluffing I’ll be happy for you and pat you on the back,” Hellmuth then proceeded to show the ace-king as he folded.

Chip counts at the end of level one (21 hands)

And @Careybear92 tweeted the following moments ago “#PREMIERLEAGUEVI OMG what an amazing table and Jesse May, Phil Laak and Jennifer Tilly commentating…poker heaven and of course Daniel N.”

Share. Twitter Facebook Google+ Pinterest LinkedIn Tumblr Email
Previous ArticleSeat Draw for Heat 2 of Group A in the partypoker813.com Premier League VI
Next Article Chip counts at the start of level three of heat two in Group A