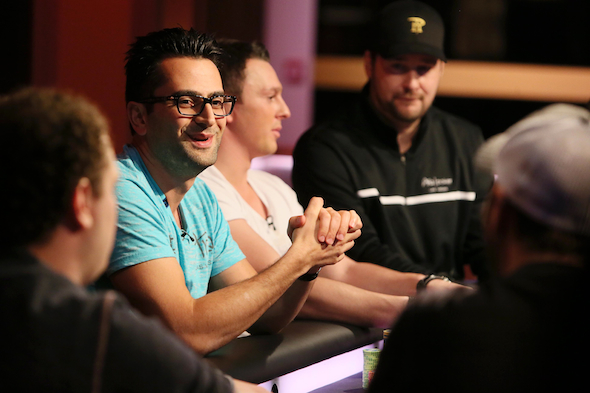 Talal Shakerchi went from the outhouse to the penthouse and then the outhouse again in Level 5 as he went from chip leader to out in eighth place. He collects $45,000 for his eighth place finish, whilst another double up has given Antonio Esfandiari the chip lead

The players chip stacks are as below. The +/- figure in brackets is their profit/loss since the end of the last level and the big blind figure is how many they have for the current level. The blinds during Level 6 will be 8,000/16,000/2,000.

Antonio Esfandiari He got a huge double up through Talal Shakerchi (see below) to claim the chip lead and all but eliminate Shakerchi.

Jungleman – Cates won a few pots, including four-betting Jonathan Duhamel when he had pocket kings and has chipped up steadily to lie third in the chip charts.

Talal Shakerchi The Brit was eliminated in eighth place and becomes the first player to be eliminated from the final table.

Talal Shakerchi moved all-in from the button with

and Antonio Esfandiari made the call with

board gave the pot to the Magician and left Shakerchi with just 48,000. The next hand Jennifer Tilly shoved with

and Shakerchi called all-in with pocket kings. However an ace on the flop was the end of him and he exited in eighth.

View from the booth

“I think playing poker triggers something In Jungleman’s head that he needs to eat. I’ve never seen him eat away from the table. You get the feeling if he went six days without playing poker he’d starve. – Jesse May on Jungleman’s eating habits

“This is East London, this is more of a beer swilling crowd,” Phil Hellmuth’s hopes of finding caviar are nipped in the bud by Jesse May.

“I’m a participator not a party pooper,” Jesse May on learning that the players are ordering shots of tequila for themselves, Jesse and Phil Hellmuth.