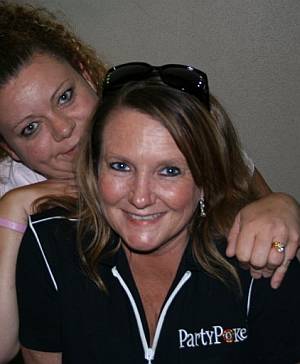 27th December was the day of the Frazer and Stylsey’s Xmas Bounty tournament with 300K Guaranteed tickets for those who kick Ian and Debbie out. The tournament was organized specially for PartyPoker’s Facebook fans, 50 players turned up to play in the $10+1 event and it lasted almost 3 hours.

Stylsey says “The game was excellent, everyone that played enjoyed! I have had lots of messages from players saying how they loved it and want more lol. Action started from the 1st hand.  Chris, our winner from the last game, made an early exit though“.

IAN_FRAZER went out in the 23rd position after going all-in pre flop with Tc, Qd. Very aggresive call from Erzbichei with Jd, 7s on Ian’s all-in, but Erzbichei flopped a pair of 7’s and there was no help for Ian on turn or on the river.

Stylsey says: “Pity I went out 12th :-( Pretty tough being a bounty though. I sat out quite a bit until it settled a bit. I played 3 hands the 1st hour all pocket 8’s and hit a set each time. I was forced to make a decision with the straight draw out there, my opponent wanted me all in, it only took me a few seconds to realise that the pot was all Stylseys.“

Stylsey picked up Qh, 9s in the big blind, checked and flopped the top pair of 9’s.  Nothing changed on turn and river and Stylsey went all-in but was called by Bainn who had pocket Jacks and slow played them all the way.

Unlucky awkword411 out on bubble with pocket Kings

Jens9100 continud playing well and ended up heads-up against Ian Frazer’s bounty winner Erzbichei. Final hand Erzbichei went all in preflop with 9d, Tc was called by Jens9100 with Qc, Js. A 9 on the flop brought pair of 9’s to Erzbichei, which was enough to win the tournament. This is the top 6:

Stylsey says “A big thank-you to all that played the “Frazer & Stylsey Xmas Tourny”. 5o runners was great. Deanomite1, my mate who I play against lots live, came in 3rd (woot woot) Deano. But a big congrats to Erzbichel taking Ians bounty plus the WIN. Awesome game all looking forward to my next game real soon.“

Make sure to fan PartyPoker on Facebook to get more info on our special tournaments and offers.