You are at:Home»Older posts»End of level five update of heat 2 in Group A of the partypoker813.com Premier League VI 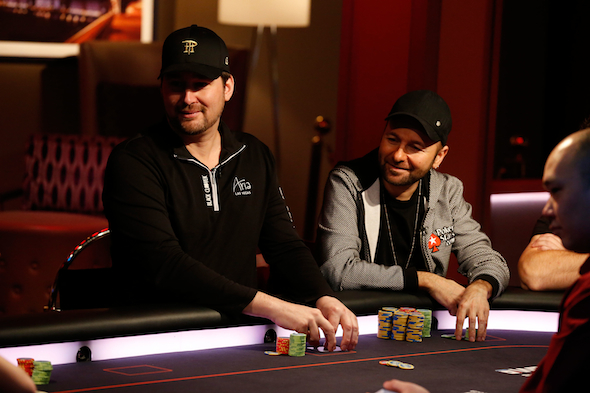 End of level five update of heat 2 in Group A of the partypoker813.com Premier League VI

Jonathan Duhamel – The Canadian won a huge pot against Scott Seiver to further boost his chances of a decent return in this heat. If he picks up a top three finish here then he’s going to be able to put a ton of pressure on the players feeling the heat in the last two heats of Group A.

Phil Hellmuth – The player everyone loves to hate chipped up in a big way in this level and as Phil Laak said. “He’s done it by making crazy bat shit plays.” Hellmuth is coming ladies and gentleman.

Daniel Negreanu – Kid Poker surrendered almost half his stack in the last level and is now into the dangerous 20 big blind territory.

Scott Seiver He lost a big pot to Jonathan Duhamel when he thought he was value betting the river, he’ll need to bounce back in this level to get his Premier League back on track.

and Seiver flat called on the button with

flop saw Duhamel go from worst to first and he fired out a bet of 27,000, call from Seiver. The

hit the turn, Duhamel now got tricky, checking it over to Seiver who, after some contemplation, checked behind. The

completed the board and in a spot where many would bet Duhamel once more checked it over to Seiver. “You’re a wizard, check behind Scott,” implored Phil Laak in the commentary booth.

View from the booth

“Look at those three having a conflab, they’re just laughing at Hellmuth. They’re like the three witches from Macbeth!.” – Jesse May on a conversations Scott Seiver, Jonathan Duhamel and Daniel Negreanu were having during a hand when Hellmuth limped in from the cut-off.