You are at:Home»Older posts»5 PartyPoker players through to Day 3 at the WPT LA Poker Classic 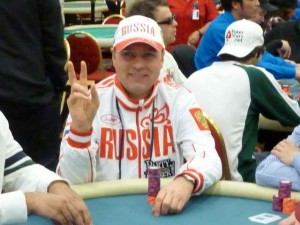 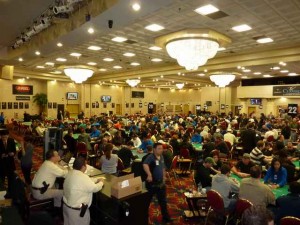 A total of 463 players made it through to day 2 of the WPT LA Poker Classic. PartyPoker had 11 players returning to take their seats for day 2. Our PartyPoker chip leader at the start of day 2 was Sergei Norikov from Russia who was in position 27.

All the players are fully supportive of each other because of the fantastic $1,000,000 bonus prize that Partypoker will award if any of our qualifiers win this main event.

If we do have a Partypoker player take down this title they will win a staggering $500,000 and all the other Partypoker players who have taken part in this event will share the other $500,000. This creates a good sense of Party spirit amongst the guys because they all have an interest in each other. George from Canada trying to win for his children

One guy who could profit more than anyone is George Grant from Canada who qualified for this event on our PartyPoker.net site after seeing a Partypoker.net TV advert one evening.

George has never previously played in a live poker tournament or even played poker for money online but I have a feeling that this will change after this week.

George admitted to being very nervous before play started on Friday but said that he was amazed how friendly everyone has been. Despite the lack of live poker experience George is giving a very good account of himself and at 17:00 on Saturday is still sitting with 17,000 chips. I asked George what he would do with the money if he won this event. He smiled and said he would travel the world and make sure his two children had a great life.

We lost a couple of our players in the first couple of levels today. Sadly Gavin Greenwood was not able to find any cards today and when he did make a move with 10 J he got called by a guy holding a dominating QJ. The flop came down Q66 and Gavin was in real trouble. A further Q on the turn sealed Gavin’s fate and sent him to the rail. Another insignificant 6 came on the river but Gavin was already on his way out of the tournament room.

Italian player also had to say “Arrivederci” to his tournament

Rudger and Nicholas also hit the rail sooner than they would have liked. By 18:00 Marco, one of two Italian players also had to say “Arrivederci” to his tournament. His friend Salvatore is still flying the flag for our Party Italia players.

With an hour to go today we still had 6 players scattered throughout the tournament room. Estimated chip counts at 20:00 Saturday were as follows: 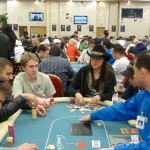 Unfortunately as I stood counting Malte’s chips he lost a pot against the legendary Johnny Chan. Malte is on a tough table because he has Jennifer Tilly to his left and Johnny Chan on Jennifer’s left. He has to pick his spots carefully but has obviously being doing just that if he can amass such a good chip stack on such a tough table.

With an hour to go, two of the chip leaders were recent PartyPoker Premier League participants, Daniel Negreanu with 300,000 and Vanessa Rousso on over 200,000.

Andrey was busted when he pushed pre-flop with Kings only to get called by a guy with Aces. No help came on the board and Andrey was greeted at the rail by his girlfriend.

With 30 minutes remaining I walked by Malte’s table to see him pulling in a huge pile of chips and player leaving the table. Malte had pocket queens under the gun and made a standard raise which was called by the blinds. On a ten high flop the blinds check and Malte makes a continuation bet which was called by the small blind. Another low card came on fourth street and the small blind check raised all in. Malte insta-called and had the guy easily covered. The queens were looking good against an open ended straight draw which never came. Malte was still stacking his newly won chips for another two hands.

5 remaining PartyPoker players all had a reasonable amount of chips

At 20:30 the chips were bagged and the big screen showed that the average chip stack was about 79,000 and only 187 made it through today. The 5 remaining PartyPoker players all had a reasonable amount of chips and they could hit the bar knowing they would have the following chips when they come back on Sunday for day 3.

George doubled up in the final hand of the night when he pushed pre-flop with pocket queens and got a call by a guy with AJ. A low board meant George would be back on Sunday.

We will also be back on Sunday when play resumes at 12:00 local time.