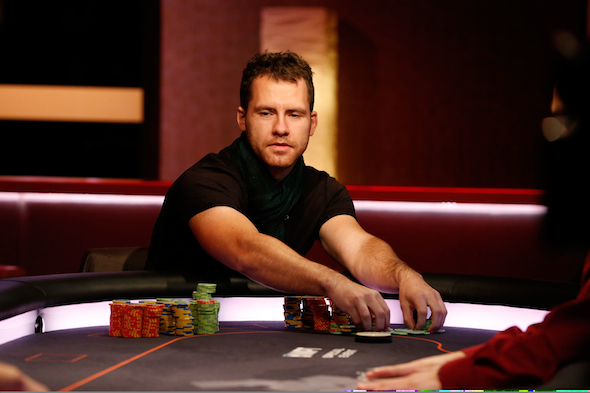 Most of the other players would’ve been rooting for Jonathan Duhamel in this heads-up battle, but it’s Daniel ‘Jungleman’ Cates who’s prevailed and taken down the maximum 16 points (and $32,000) on offer.

The key hand in heads-up play came when Duhamel raised with king-eight and then called Jungleman’s three-bet, the latter had them aces. On the queen high flop Jungelman c-bet, Duhamel raised all-in, Jungleman snap called and his hand held up.

That left Duhamel with just 62,000 and although he got it all the way back up over 300,000 he couldn’t get a serious foot hold in the match and Jungleman took the victory.

Remember the top three qualify for the final automatically, whilst fourth and fifth will play-off in a heads-up match against fifth and fourth respectively in Group B. Each point they earn in the group stages equates to 10,000 chips at the final table.

The live stream for the second heat in Group B should start at around 9.30pm GMT.