Dwight D. Eisenhower was the 34th President of the United States and is a legendary figure. Eisenhower is also the alias Christian Jeppsson is known as in online poker circles. Jeppsson took another step forward to legend status on May 20 when he was crowned the WPT Online Championship champion, an accolade that came with more than $920,000.

Only eight players returned to action in the $3,200 buy-in WPT Online Championship. Jeppsson held the chip lead going into the final table, but the dangerous Sam Greenwood was hot on the Swede’s heels.

Netherlands’ Pascal Teekens was the first player to bust. The Dutch grinder got his hands on a $66,775 prize, although it took 90-minutes of action to lose the first player.

and Viktor Ustimov snap-called in the big blind with

. No help arrived from the board and Teekens busted. Teekens’ exit locked up six-figure scores for the surviving seven players.

Greenwood busted in seventh despite starting the day second in chips. Greenwood’s 2.2 big blind shove from the small blind with

was called by Ustimov holding

. Ustimov jumped into the lead on the flop of the

board and stayed in front. Good night, Greenwood.

. A final board reading

handed the massive 30.2 million pot to Jeppsson and saw Hartmann crash out in sixth.

Then There Were Four

Alexander Clark then fell in fifth-place for $221,733. The British player was in the small blind and he limped in for 350,000 with

before calling off his 5,003,816 stack when Ustimov set him all-in with

. A five on the flop wasn’t what Clark wanted to see and his tournament came to an abrupt end.

It didn’t take long for the tournament to lose another player, that player being Nikolay Ponomarev. Ustimov opened to 880,000 and called when Ponomarev jammed for 10,077,468. It was

to reduce the player count by one.

Third-place and $477,333 went to Juuka Koskela of Finland. Koskela lost a large pot to Jeppsson before pushing his last 12 big blinds into the middle with

. Ustimov called in the big blind with

and turned a ten on the

The tournament clock was paused because Jeppsson and Ustimov looked at the numbers for a potential deal. They liked what they saw and a deal was struck. Ustimov banked $865,542 with Jeppsson collecting $913,783. This left $10,001 for the eventual champion.

only to discover he was drawing dead against

of Jeppsson. The meaningless

river completed the hand and awarded the title to Jeppsson. 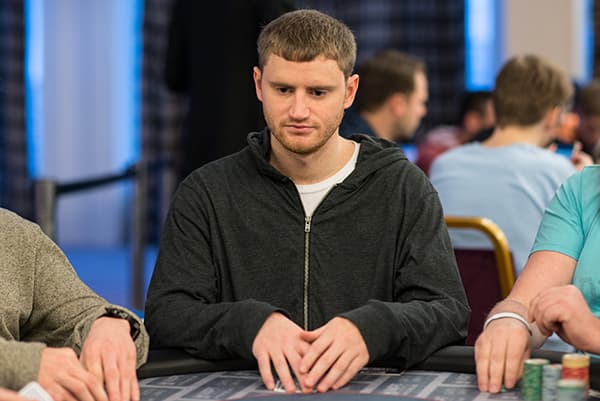 While Jeppsson was marching onto victory, David Peters was making his way to yet another title. This latest victory saw Peters bink the $10,300 High Roller event, outlasting 100-opponents to lock up $247,450.

Peters defeated David Gent of the UK heads-up, leaving Gent to scoop $176,750. Third-place finisher, the legendary Andras Nemeth, won $126,250, the only other six-figure prize on offer.

Earlier at the final table, Dan Smith and Fabrizio Gonzalez fell in eighth and seventh-place respectively. Jorma Nuutinen cashed in sixth for $50,500 with Mark Davies of Ireland felling away in fifth for $65,650. Daniil Kiselev of Russia was the fourth-place finish. He hauled in $88,375.