You are at:Home»Online Poker»Brace of High Roller Club Victories for Reeves and Eveslage

Brace of High Roller Club Victories for Reeves and Eveslage

Luke Reeves and Chad Eveslage triumphed in two events each for combined prizes worth $111,833, a great set of results for a Tuesday evening’s grind. 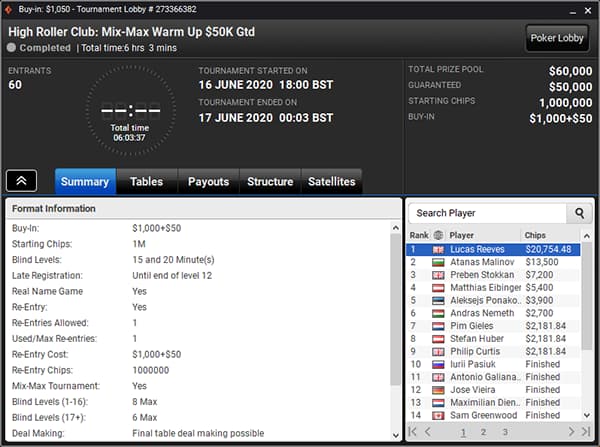 The first of Reeves’ victories came in the $1,050 High Roller Club: Mix-Max Warm Up $50K Gtd, a tournament that saw 60 players buy in. Nine of those starters saw a return on their investment with Philip Curtis, Stefan Huber and Pim Gieles being the first players to collect some cash.

Andras Nemeth reached yet another major final table but had to make do with sixth-place here. Estonia’s Aleksejs Ponakovs and Matthias Eibinger were the next casualties before Preben Stokkan busted in third to set up a one-on-one battle between Atanas Malinov of Bulgaria and Reeves.

Both players were guaranteed a five-figure prize, but there was a difference of more than $7,000 between the payouts. A lack of a deal meant Malinov netted $13,500 when he lost heads-up to Reeves, leaving the British star to bank $20,754. 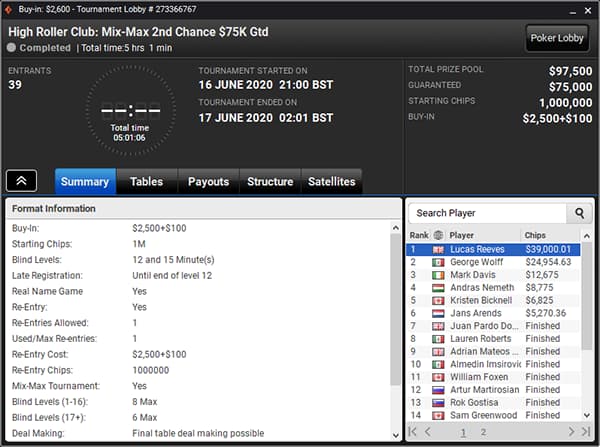 A more compact field of 39 entrants created a $97,500 prize pool that the top six finishers shared. UK-based Spaniard Juan Pardo was the unfortunate soul who burst the money bubble. His exit paved the way for a min-cash of $5,270 for the surviving six players.

Jans Arends of the Netherlands secured this sum before Team partypoker’s Kristen Bicknell saw her tournament end in fifth place, a finish worth $6,825. Nemeth reached this final table too, falling in fourth place for an $8,775 addition to his bankroll. 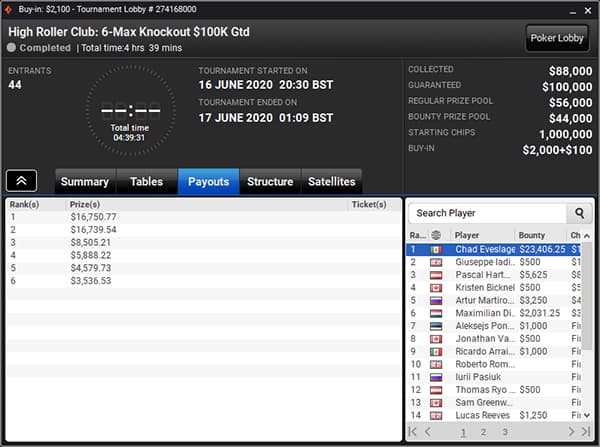 Evelsage secured the $5,752 top prize after beating Tomas Paiva heads-up. Eveslage’s prize money was given a substantial boost courtesy of $6,171 worth of bounty payments. Paiva didn’t do too badly for himself either, his $5,746 runner-up prize had $2,132 added from the bounty prize pool.

There was another final table appearance for Matthias Eibinger but the talented Austrian ran out of steam and fell in fourth-place. Eibinger banked $2,579 from the main prize pool and $1,640 worth of bounties. 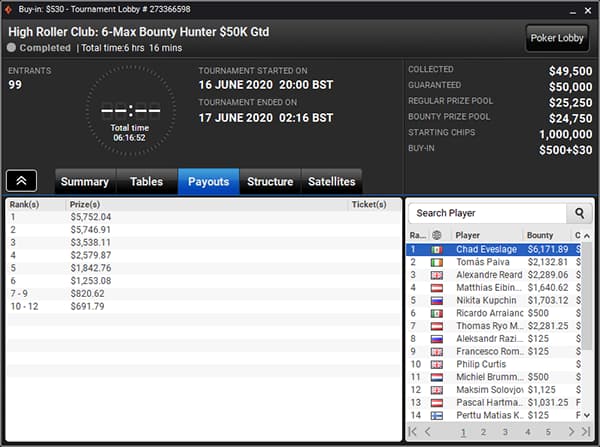 Eveslage tasted victory again in the $2,100 buy-in High Roller Club: 6-Max Knockout $100K Gtd and padded his bankroll with a combined $40,156. The Mexico-based star defeated high roller regular Giuseppe Iadisernia one-on-one to leave the runner-up to walk away with a combined $17,239.

The other four finalists were a star-studded bunch. Maximilian Diender and Artur Martirosian were the first pair to bust. They were then joined on the rail by Kristen Bicknell who won another $6,388. Pascal Hartmann, who reached the final table of the WPT Online Series Main Event, crashed out in third for a combined $14,130.