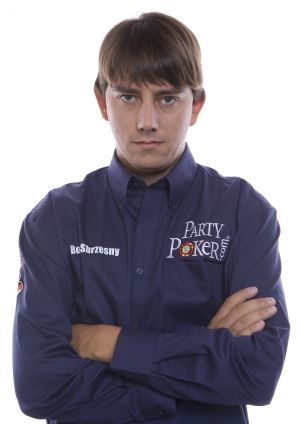 Bodo Sbrzesny: Baby got back at the Big Game

Last week I was at the prestige Big Game cash game in London, which was recorded for television. Such an event attracts many top pros, as they like to use the TV time to represent their sponsorship and/or themselves. I was lucky to be able to play this year again at the event and I was looking forward to repeating my performance of 2008.

That’s life, you can’t have everything

The farewell from home was hard as my grandma will turn 90 soon and I do not know yet when I will be in Germany again. It is also a pity that I couldn’t have a party in my new apartment, but instead I took some photos which I will put online soon. But that’s life, you can’t have everything!

Always when I see the PartyPoker guys I am happy because it is so funny with them! They are hilarious, like to treat me and I would say it just matches. That’s why I am looking forward to the next days. I am sure I will not get bored.

No guys, not what you are thinking

Carrie is responsible for me and she looks well after me… no, no, no guys, not what you are thinking. After my arrival at the airport I received a text message straight away that the appointment will be rescheduled. Apparently her favourite soccer team just had lost the semi-final in the FA-Cup.

But I was happy with that, as my flight had a delay of 40 minutes and I had to wait for my luggage for a long time. At 8 pm I arrived at the hotel and at 8.30 pm the meeting was already (first we had arranged 7 pm – How naive I was LOL).

After we had visited the casino and we had eaten something I went quite early to bed, as I was scheduled to play between 8am and 6pm on the next day. As 8am was very unlikely I tried to keep myself awake to be able to sleep longer. Well done Bodo, at 6am my mobile phone rang and I was asked to play at 6.45 am. Well, 1-2 coffees and up you get!

After the interviews the marching-in began inclusive my chosen music for it (Sir mix a lot – Baby got back) and then finally I got my first cards dealt out.

Blinds were 25/50, minimum 5.000 British Pound per player at the table, but many played with 10k or 20k. The blinds were also raised to 25/50/100 for action matters, which promised a special structure with a lot of action.

My first table was tougher than I thought it would be! Justin “zeejustin” Bonomo, Isaac “luvthewnba” Haxton, David “Viffer” Peat, Phil “unabomber” Laak, Neil Channing, Luke “Fullflush” Schwarz were the nominated opponents next to me.

A few of them I did not know from seeing them or even their last names I had never seen before. If somebody introduces themselves as “Justin” then you don’t think about the calamity – After all he is not considered as opponent that you desire, if you want to really earn money!