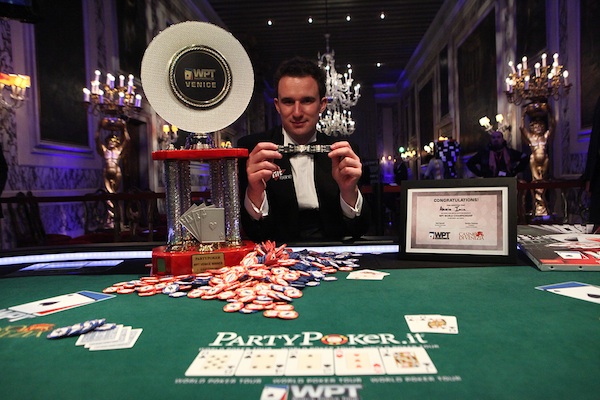 After a heads up encounter that has lasted a staggering 8hrs and 20 minutes; Alessio Isaia has become the WPT Champion at Venice.

There are pinnacles in any chosen sport or field that a person chooses to work in. In the world of poker the World Poker Tour (WPT) is unquestionably one of those pinnacles.

Today eight people, from various parts of Europe, all turned up to be treated like superstars for the day. They were photographed more than the Beckham’s and even had their own screaming fan base. After all the prematch photos and interviews had been finished it was time for the real action to start. It was time to shuffle up and deal!

The action yesterday was at a snail’s pace as the importance of making the final table became apparent to everyone. Today was a completely different story and Renato Paulini, one of yesterday’s tighter players, moved all-in for 405,000 during the first hand. Nobody called the first all-in but the Russian Max Lykov did call the second one.

Again it was Paulini who had moved all-in but his

of Lykov and he was eliminated in 8th place.

Everyone was expecting the shortest stack to be eliminated next. That stack belonged to the oldest player at today’s final table Luca Fiorini. But instead of being eliminated he doubled up, his chip donator was the chip leader at the start of the day, David Vamplew.

In fact it was many people’s favorite here today, Max Lykov, who was eliminated in 7th place. The pocket aces of Emmanuel Rodrigues doing most of the damage before a Szabolcs Mayer and Adrien Garrigues tag team effort finished off the big Russian; both players held [ax][kx]in a three way all-in where the only loser was Lykov.

Luca Fiorini could not keep up the momentum after his double up and he was soon at the bottom of the pile again. In the end he moved all in with

and was called by the

of his compatriot Alessio Isaia. Four of the community cards were on the felt and Fiorini must have thought he was doubling up for the second time of the day when a cruel seven hit the river and he became our 6th place finisher.

David Vamplew lost a portion of his stack three barrel bluffing into the open arms of Mayer. Then Mayer eliminated Adrien Garrigues in 5th place after an ill-timed river shove bluff by Garrigues was snapped up by Mayer.

That left four players and the four that were left were four of the five trying to win the tournament during the dying embers of last night. Rodrigues, Vamplew, Isaia and Mayer. Emmanuel Rodrigues was next to go after he moved all-in over a Vamplew raise holding

only for the Scotsman to call with

and then nail a set on the flop.

So we had a triumvirate of Mayer, Isaia and Vamplew. Vamplew was chasing his second piece of the three-piece puzzle known as the Triple Crown and had shown that he was capable of winning events like this in the past. But he will have to wait a little bit longer for his second title because he was the man eliminated in 3rd place at the hands of that man Mayer again.

So we had a heads up battle between the Hungarian Szabolcs Mayer and the local hero Alessio Isaia. It started at 18:30 and it lasted for staggering 8hrs 20 minutes.

Mayer started as the overwhelming favorite 12,865,000 chips compared to the paltry 2,800,000 of his opponent. Then just before the dinner break all the money went into the middle with Isaia holding

and Isaia doubled up.

Isaia then went into over drive and really outplayed his opponent and eventually grabbed the chip lead but he didn’t have it for long. We had our second all-in show down and this time it was Mayer with

and Mayer doubled up when the board gave him quads!

for the draw that never turned up.

all-in pre flop against the

of Mayer. Isaia just kept winning pot after pot and eventually just before 03:00 in the morning, Mayer moved his final 2.6 million into the pot holding

and he was called by the

The board could not help Mayer and we had a new WPT Champion in the shape of Alessio Isaia!

You can catch all of the live updates from day 2.